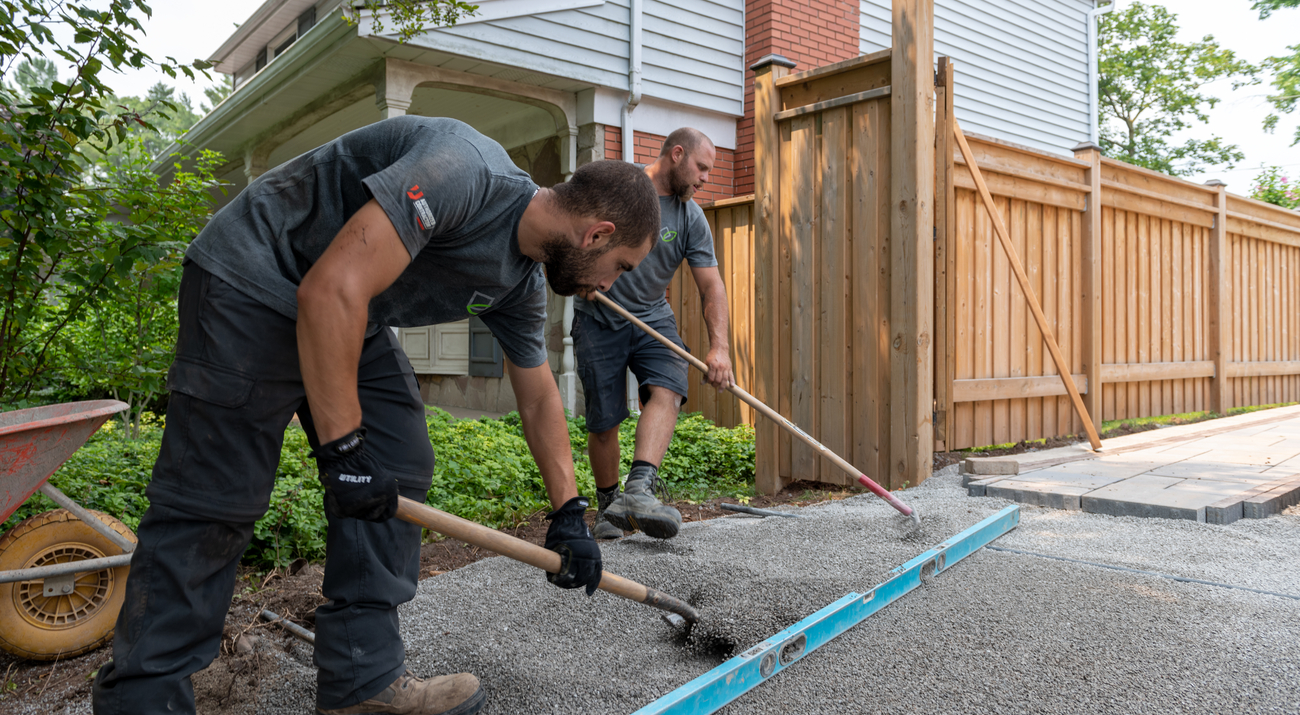 The Demands of the Work

It’s just the nature of the job: Hardscape projects can be grueling with long days and longer weeks, often in oppressive heat and demanding conditions. And while some jobs are more physical than others, any project that requires an experienced crew rarely fits the description “easy.”

Hardscape contractors face a gauntlet of challenges when it comes to the logistics of planning, scheduling, staffing, and completing jobs – all the while maintaining margins, or at least ensuring projects finish in the black.

Hiring and retaining crew members is perhaps their greatest challenge though.

It means navigating a labor pool that’s in constant flux to find the required experience for your crew, and the right crew leaders to manage the job. A highly unpredictable workforce, driven by the scarcity of H-2B visas and local competition for labor, make the hiring process especially onerous.

Once they’re hired, retention becomes paramount. Given all the intricacies of planning and running a large project, the physicality of the work, and the various demands on the project manager or crew leader, it’s no wonder people management often receives short shrift. Even the most competent managers are often experts in their trade first, and people-oriented leaders second.

Unfortunately, that’s a scenario that can easily lead to burnout, not just of those tasked with the manual labor, but of managers and crew leaders as well. No one wants to see that happen. Especially not a business owner with a giant “Our people are our greatest asset” banner on their website.

Burnout: What It Is and What Causes It

Burnout is actually well understood by psychologists, and it afflicts employees across all industries.

It’s a word that gets a lot of casual misuse, but actual burnout is a state of acute exhaustion that can severely affect a person’s performance, mood, focus, and motivation. In many cases it’s detrimental to both appetite and sleep – the very definition of “running on empty,” not only physically, but emotionally and mentally.

The most common causes of burnout are framed in a variety of ways throughout the literature, but the top three are remarkably consistent. Maybe you’ve experienced one or more of these at some point in your career:

You might notice a common thread running through all three items: they all point, to one degree or another, at the boss, and perhaps the boss’s boss.

Setting aside burnout for a moment, the number one reason people leave their jobs, across all industries, is simple: they hate their boss.

That fact may suggest some alternative ways to frame the “causes of burnout” list. More importantly, it may foretell the central focus of your company’s strategy for preventing burnout.

It’s not the midday heat burning out your employees, it’s something that’s far more in your control.

Recognition – Keeping an Eye on the Team and their Leader

Even seasoned leaders can miss some of the telltale precursors of burnout – in crew members, and in themselves.

Supervisors get so bogged down with planning and logistical issues that it’s all too easy to set the human issues aside.

When a normally professional and productive crew member becomes irritable and is constantly tired, or when their attitude dips to new lows, it may be time for their supervisor to step in. Not by dismissing them as a problem employee, but by proactively getting to the bottom of the issue. Few competent employees undergo such dramatic changes without their work life being a significant contributing factor.

A Strategic Roadmap for Preventing Burnout

Understanding what burnout really is, coupled with the ability to recognize when an employee is at risk, are good first steps toward addressing the issue.

But the ultimate solution lies in cultivating a work culture, both in the office and on the jobsite, that discourages the practices that cause it.

The previous section outlined the top three causes of burnout, and what they have in common. Here are some quick tactics to help inspire an effective anti-burnout strategy for your landscaping company.

When a hardscape project is running smoothly, a certain sense of satisfaction builds across the team. Materials are delivered on time, daily goals are met, the weather cooperates, and a crew who knows what they’re doing and is happy to do it. That sort of situation takes care of itself.

But when things go off-plan, perhaps for reasons beyond anyone’s control, the on-site leader’s reaction makes a big difference. That means acting quickly, not just with the supplier who blew a major delivery commitment this morning, or the mini excavator that broke down midday, but also with the crew to reassure them that things are being handled. Whether they’ve been told or not, they know when something’s amiss.

And the first question everyone asks themselves is, “How will this affect me?”

The good crew leader insulates team members from the stresses of management and doesn’t readily use them as a tool to compensate for mistakes.

That doesn’t mean hiding what’s really going on. Pulling the landscape architect aside and speaking in hushed tones every time they show up on-site is not a stress-reducer for the crew.

Supervisors need to be upfront with everyone when issues arise that may affect schedule, workload, or assignments. Good leadership can minimize stress in the team by not only acknowledging how issues affect everyone, but by articulating plans to address them – ideally something aside from, “We’re all just going to have to work longer and harder.”

Someone with extensive experience leading crews doesn’t necessarily have a naturally high EQ (emotional quotient). Leaders need such a diverse set of skills that there are always one or two that don’t come naturally and have to be actively cultivated.

Leaders with a high EQ listen – they pay attention to their crew’s concerns. This is important. It’s just as important that they feel like you’re actually listening.

Leaders with a high EQ acknowledge – they give feedback, recognize hard work, take blame when they make a mistake, and express appreciation for each individual’s contribution to the team.

Leaders with a high EQ engage – no matter what the job goals are, the best leaders understand that part of their role is to develop employees. They look for teaching moments and ways to instill confidence, help hone the skills their crew already has, and teach them new skills to add to their tool box.

And to re-emphasize Tactic #1, leaders with a high EQ communicate – they clearly explain issues that arise and keep employees abreast of assignments, schedules, and job status. They’re upfront about problems and how to solve them. They keep the crew in the loop and make sure everyone has a sense of being integral to the project; changes in planning or schedule aren’t just secret “management stuff.”

If this all sounds a little New Age, a bit too sensitive for a jobsite, it might be. On the other hand, if your company is affected by employee burnout, you ignore this aspect of management at their peril. In a tight labor market, that may not be the best strategy.

When things get dysfunctional, there’s no one to look to but the leader.

Three things are in direct control of the supervisor on-site:

One thing that can destroy a team is when the leader employs favoritism. It’s an issue that’s as easy to address as it is to ignore. It might not seem like that big of a deal when the boss gives the best schedule and best assignments consistently to one crew member.

But a zero-tolerance approach for favoritism will earn the respect of the team.

Consider what the supervisor asks of their team. Is your company demanding that the boss on-site get more out of the team? Is that happening over and over again? If things are behind schedule, and the workload is increasing, there’s eventually going to be a breaking point.

And your crew must have the right tools for the job, especially for the heavy lifting. Machines don’t tire, they’re not easily offended, and they don’t mind being overworked. If your overages routinely demand higher productivity, consider investing in the right equipment.

It’s a given that everyone on the crew understands the physical demands. They get that the seasonal nature of hardscaping often means working in the hottest conditions. But that understanding doesn’t reduce the workload, nor does it make the human factors go away. A crew leader can no more afford to neglect human issues than they can logistics – it’s all part of day-to-day job management.

Still, if there’s no firm direction for jobsite supervisors, it’s easy to adopt the attitude that crew members are paid to do a job, and that part of that job entails handling their own problems. Which isn’t always wrong. By and large, that’s the default rule in any at-will employment relationship. After all, it’s just business.

But when it begins to affect your business, even a purely analytical and ruthless evaluation can rightly conclude that there’s a bottom-line benefit to retaining crew members by addressing their concerns directly, rather than risk losing great employees.

Understanding, recognition, and intervention can make a huge difference.

It matters, because when the going gets tough, the tough can get going – just not necessarily in the direction you want.